Just added to your cart

The Best Bag On The Market

Sold out
Sold out

Benefits Of The Wreck Bag

- Wreck Bags are designed to target both primary and secondary/ stabalizer muscles. As the weight shift around inside the Wreck Bag you are forced to activate muscles that get ignored by traditional barbells and dumbbells, making Wreck Bag workouts more effective!

You can complete up to 100+ excercises using only ONE tool! From upper body curls and presses to lower body lunges and squats, Wreck Bag's got you covered

- Whether you workout indoors or outdoors, Wreck Bag is built to handle the most rugged workouts. Wreck Bag's use a unique polypropelene outer material and have reinforced stiching throughout the product, making it more durable than any other bag on the market.

Wreck Bag Compared To Other Sandbags 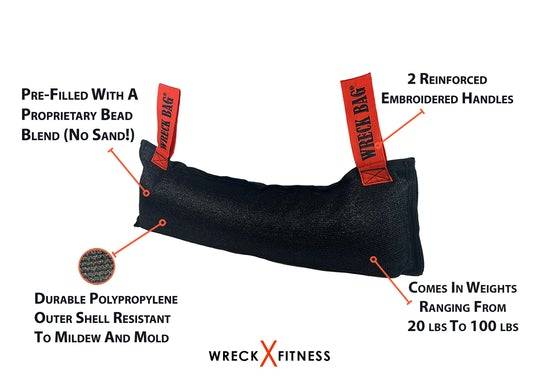 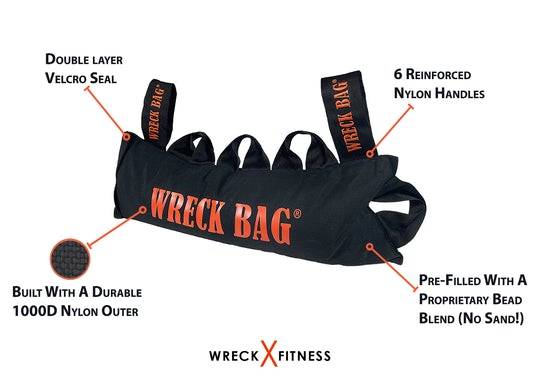 Wreck Bag has made a huge impact in CrossFit, OCR (Obstacle Course Racing) and Home Fitness since it's inception in 2014. Below are the ways Wreck Bag has been used in the fitness industry over the years.

- In 2014 Wreck Bag is created and quickly sets itself apart from other sand bags for being the first bag to be pre-filled and to contain no sand.

- After exploding onto the OCR scene, Wreck Bag is featured in multiple OCR races including F.I.T. Challege, Bonefrog, OCRWC, OCR NorAm's and many more!

- In 2018 Wreck Bag is used as the official heavy carry component in two of the largest Crossfit Game's qualifiers, the Granite Games and WODAPALOOZA

- In 2018, Wreck Bag teamed up with legendary CrossFit coach Ben Bergeron to become the offical bag of his Comptrain program. Together Bergeron and Wreck Bag collaborated to create the 100 Pound Wreck Bag.

Over the years, Wreck Bag has expanded and grown, but has always stayed true to its roots and continues to strive to be the best functional fitness bag on the market. To this day each bag is handmade with care and attention to detail in Providence, RI, in order to ensure quality and perfection with each order.

Promotions, new products and sales. Directly to your inbox.